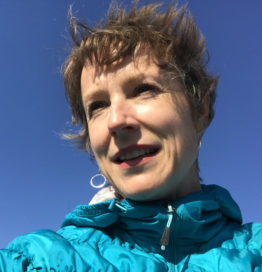 With a PhD in cultural-historical geography and degree in Creative Writing, Sarah de Leeuw is a professor who holds a Canada Research Chair in Humanities and Health Inequities with the Northern Medical Program at UNBC, the Faculty of Medicine at UBC. Her scholarly and creative work focus on marginalized people and geographies, especially in Northern British Columbia. Editor of three textbooks and six books of poetry and creative non-fiction, her writing has received a Western Magazine Gold Award, two CBC Literary Awards, a Dorthey Livesay Award, and nominations for both the Rodrick Haig Brown Award and the Governor General’s Literary Prize for non-fiction. In 2017, de Leeuw was appointed to the Royal Society of Canada’s College of New Scholars, Artists and Scientists.

Eloquence through Estrangement: How to Make Your Writing New, Unexpected, Fresh, and Better.

Eloquence through Estrangement: How to Make Your Writing New, Unexpected, Fresh, and Better.