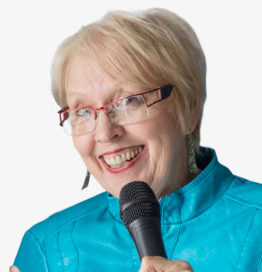 Judy Millar is a writer, speaker and comedic storyteller. She’s been published in Reader’s Digest, Writer’s Digest and in anthologies such as Flash Nonfiction Funny (Woodhall Press, 2018). She’s won numerous awards including the John Kenneth Galbraith Literary Award and has been a two-time finalist in the Mark Twain House Royal Nonesuch Humor Writing contest. Judy entertains audiences with comical stories based on her life experiences—solo, and as half of the storytelling duo “WordChickz.”

She says she’s worked as a poultry plucker, an inept electrician and an inadvertent brothel-owner, as well as a puppeteer, a song lyricist, a greeting card writer, and (primarily) a publications editor, but none of it was as much fun as being a comedic storyteller—although most of it paid better. All of it finds a way into her stories. Judy authored Beaver Bluff: The Librarian Stories in 2012 and is compiling an essay collection: Millar Lite: A Comic Look at Life, Love, Sex and Survival.

She lives on beautiful Vancouver Island with her husband (aka “Kayak Guy”) and two ShiChi puppies, Rocco and Panda.