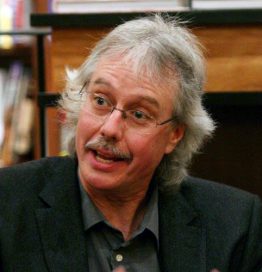 Ian Weir is a multiple award-winning playwright, screenwriter, TV showrunner and novelist. Born in North Carolina, he was raised in Kamloops, where he told his piano teacher that he wanted to be a writer when he grew up. (Her reply: “Yes, that’s a nice hobby. But what do you want to do for a living?”)

After working for several years as a newspaper reporter, in Kamloops and Ottawa, he completed a BA in English at UBC and an MA in Middle English Language and Literature at King’s College, University of London – an experience that started a life-long love affair with London itself. He wrote several radio plays for CBC and BBC, before establishing himself as a stage playwright. His first full-length play, The Idler, premiered in Vancouver in 1987, winning a Jessie Award for Best New Play and going on to several other productions across Canada, at which point he discovered (to his considerable surprise) that he seemed to be doing this full-time. He has since written more than a dozen plays, and has been produced internationally.

His first novel, Daniel O’Thunder, was a finalist for four awards, including the 2009 Commonwealth Writers’ Prize for Best First Book, and the Amazon.ca First Novel Award. His second novel, Will Starling, was longlisted for the 2016 International Dublin Literary Award. The Death and Life of Strother Purcell is forthcoming in September of 2018.

Ian lives in Langley with his wife, Jude, and their daughter Amy. He lives and dies with the BC Lions, roots passionately for the Toronto Maple Leafs, and continues to think fondly of his old piano teacher.