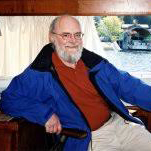 Howard White was born in 1945 in Abbotsford, British Columbia. He was raised in a series of camps and settlements on the BC coast and never got over it. He is still to be found stuck barnacle-like to the shore at Pender Harbour, BC. He started Raincoast Chronicles and Harbour Publishing in the early 1970s and his own books include A Hard Man to Beat (bio), The Men There Were Then (poems), Spilsbury’s Coast (bio), The Accidental Airline (bio), Patrick and the Backhoe (childrens’), Writing in the Rain (anthology) and The Sunshine Coast (travel). He was awarded the Canadian Historical Association’s Career Award for Regional History in 1989. In 2000, he completed a ten-year project, The Encyclopedia of British Columbia. He has been awarded the Order of BC, the Canadian Historical Association’s Career Award for Regional History, the Stephen Leacock Medal for Humour, the Jim Douglas Publisher of the Year Award and a Honorary Doctorate of Laws Degree from the University of Victoria. In 2007, White was made an Officer of the Order of Canada. He has twice been runner-up in the Whisky Slough Putty Man Triathlon.

The Canadian Historical Association has cited publisher Howard White as “a tireless promoter and creator of quality British Columbia regional history,” recognizing that Harbour Publishing “has nurtured and brought into being a remarkable range of works that capture the essence of British Columbia.”